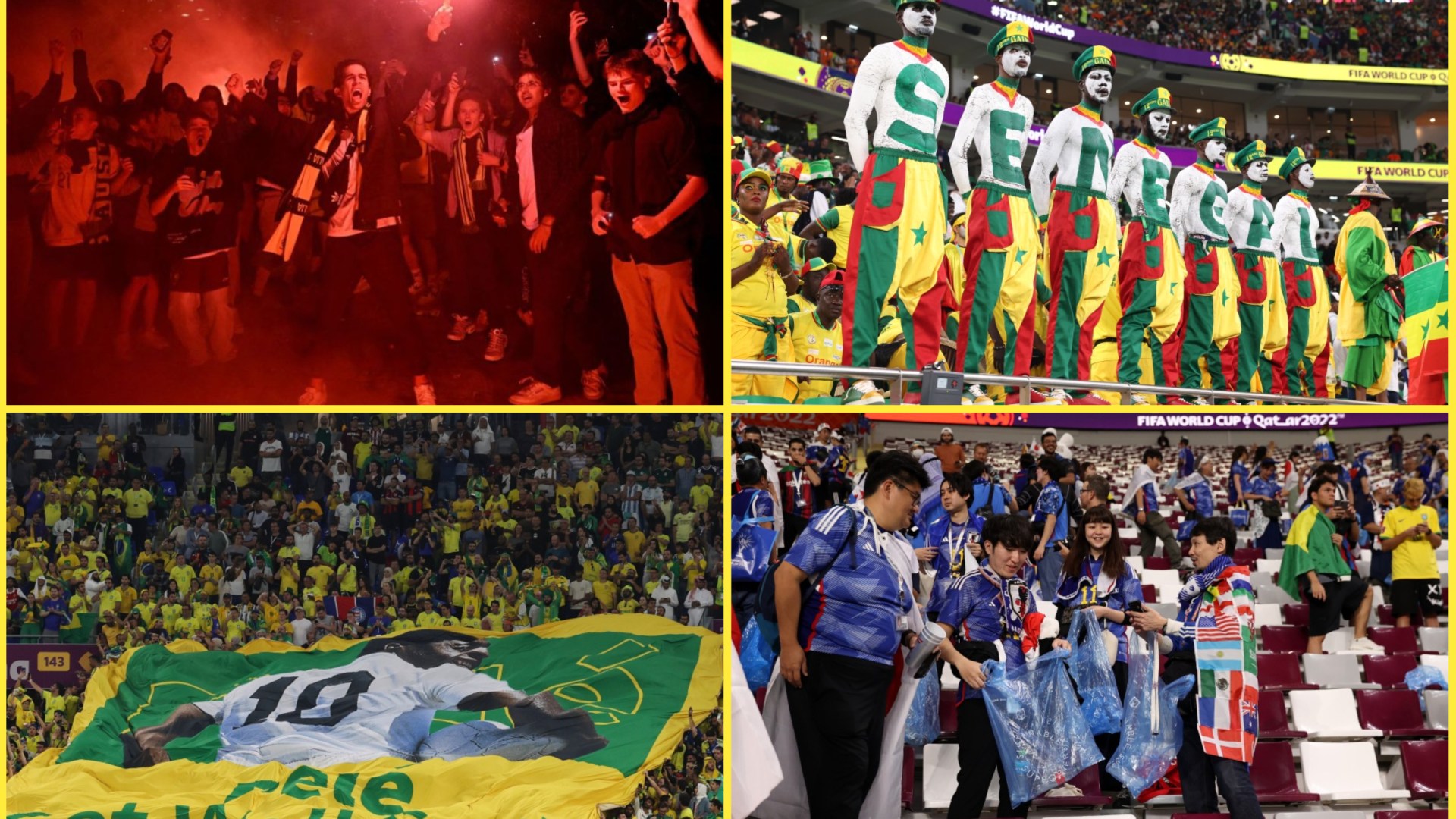 The 2022 World Cup in Qatar has been one of the best ever – and fans have more than played their part.

It has featured some incredible shocks, with Saudi Arabia’s win over Argentina the first major upset before Japan went on to stun Germany and Spain.

Morocco, though, were biggest surprise package as they knocked out Belgium and Portugal before giving France to fright of their lives in the semi-finals.

Along every step of the way football fans have been at the heart of every stunning goal and all the headline moments.

Here are some of the most memorable fan moments…

Ahead of the tournament, Carling and Umbro teamed up to create an epic new football shirt...

From November 20 to December 18, Carling are giving away 40,000 Umbro X Carling football shirts in pubs across the country!

Look out for Score with Carling for your chance to win.

Limbs, flares and huge crowds – Australia fans back home went wild for their team’s storied World Cup journey as they qualified for the last 16 for the first time since 2006.

The Socceroo supporters that made the trip to Qatar? Slightly more muted reactions…

One bearded Aussie fan was plastered on the big screen during his side’s opening 4-1 defeat to France. 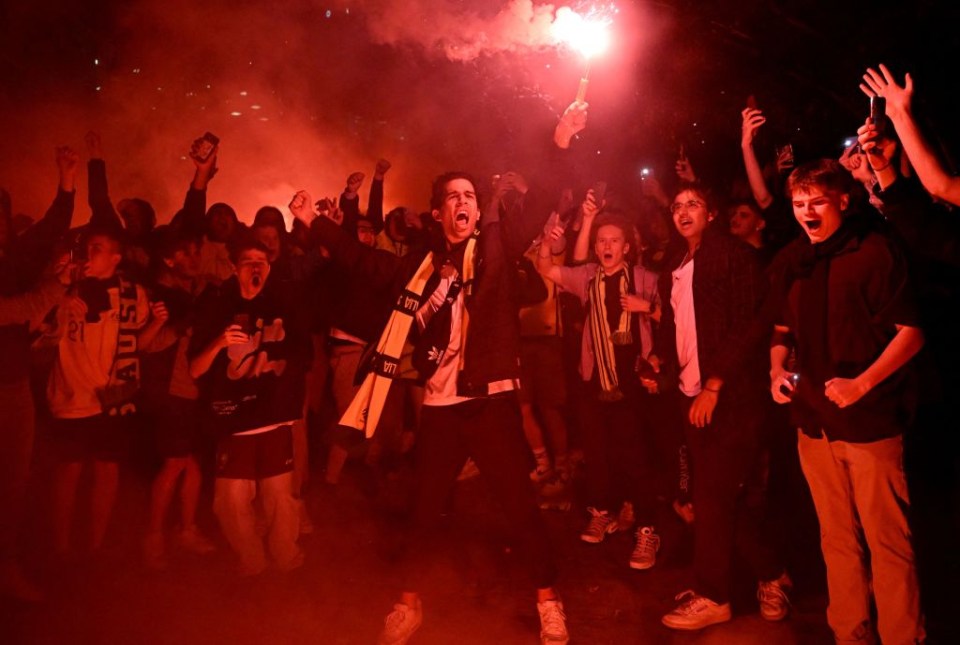 Australian fans were celebrating in the early hours in Melbourne 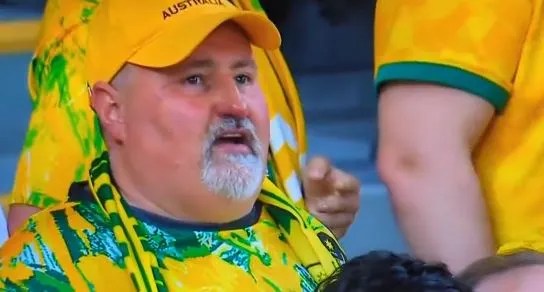 From the fans that didn’t know they were on the television screen to one supporter who wanted to take advantage of every camera there was.

Brazilians were devastated when Neymar went off injured in their first game and missed the rest of the group stage.

In his absence, however, one lookalike fan Eigon Oliver found himself making just as many headlines throughout the Qatar tournament.

The ‘fake Neymar’ made several public sightings as the Paris Saint-Germain star, posing for pictures and signing autographs.

He even fooled stadium security and was granted access to the pitch for Brazil’s 1-0 win over Switzerland.

Not to be outshone by his lookalike, the real Neymar joined his Brazil teammates and fans in paying tribute to Pele after beating South Korea.

The 82-year-old has been in hospital as he continues to battle cancer and a respiratory disease aggravated by COVID.

The Brazil squad unfurled the banner, which featured just one word – ‘Pele!’ – alongside a picture of the Brazil great on the Stadium 974 pitch following their 4-1 victory.

Fans also held up a banner of their own, featuring an image of Pele with the number 10 on his back and the message: ‘Get Well Soon’. 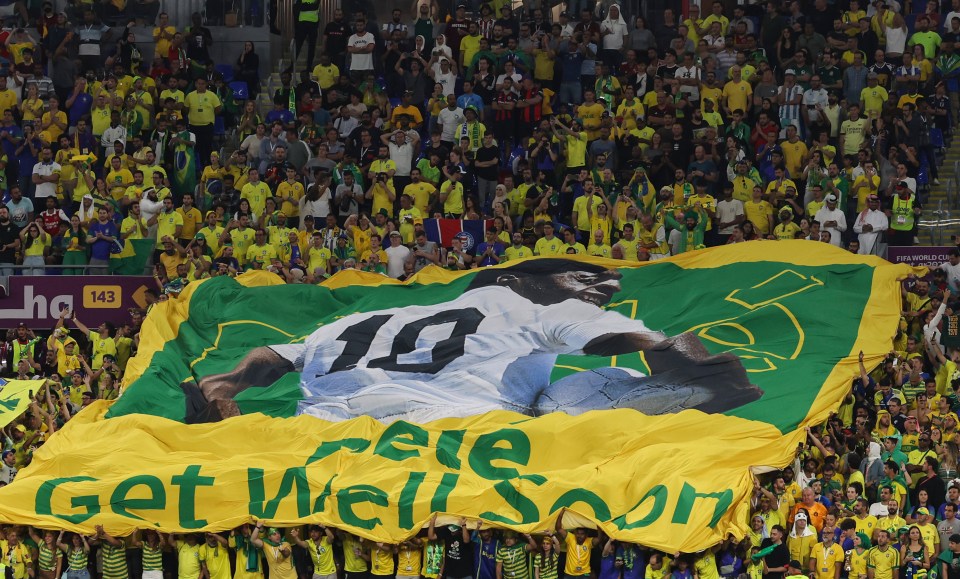 Supporters unveiled a banner in tribute to the Brazilian legend 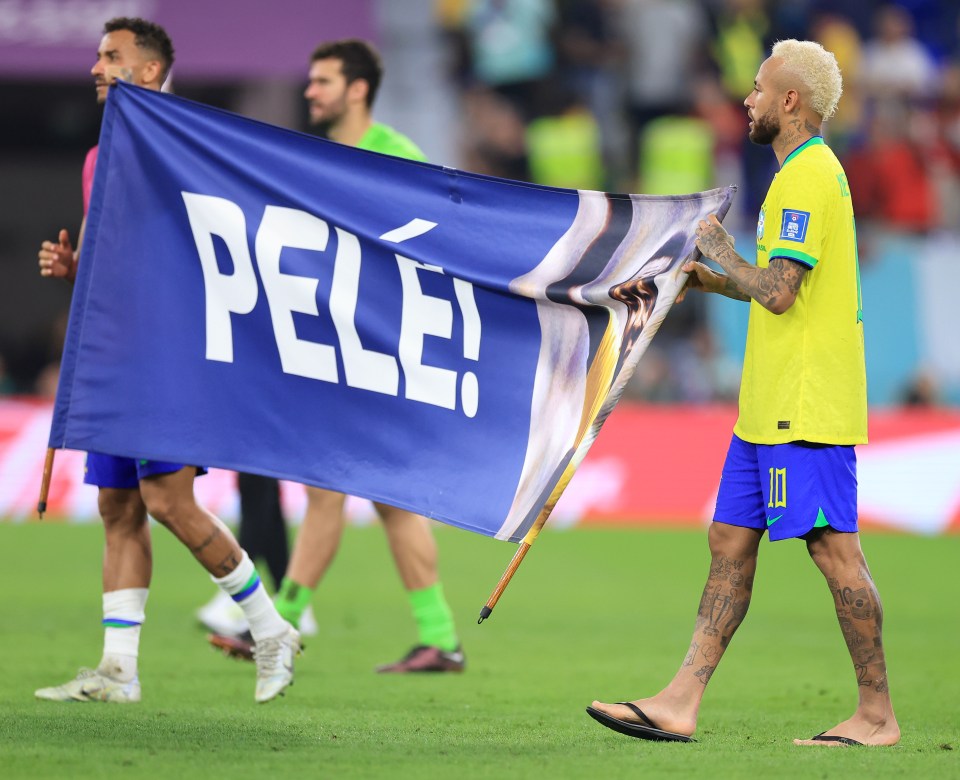 From respect to an icon to respect for everyone…

Japan suffered a heart-breaking penalty shootout exit to Croatia in the last 16 after beating European giants Spain and Germany to top their World Cup group.

But just as the players can be proud, Samurai Blue supporters had already won praise for cleaning up after all of their games.

The practice first went viral when the Japanese players made the effort to leave their changing room immaculate in 2018.

And their fans continuing their practice in Qatar even led to Morocco supporters copying the trend for their 2-0 win over Belgium. 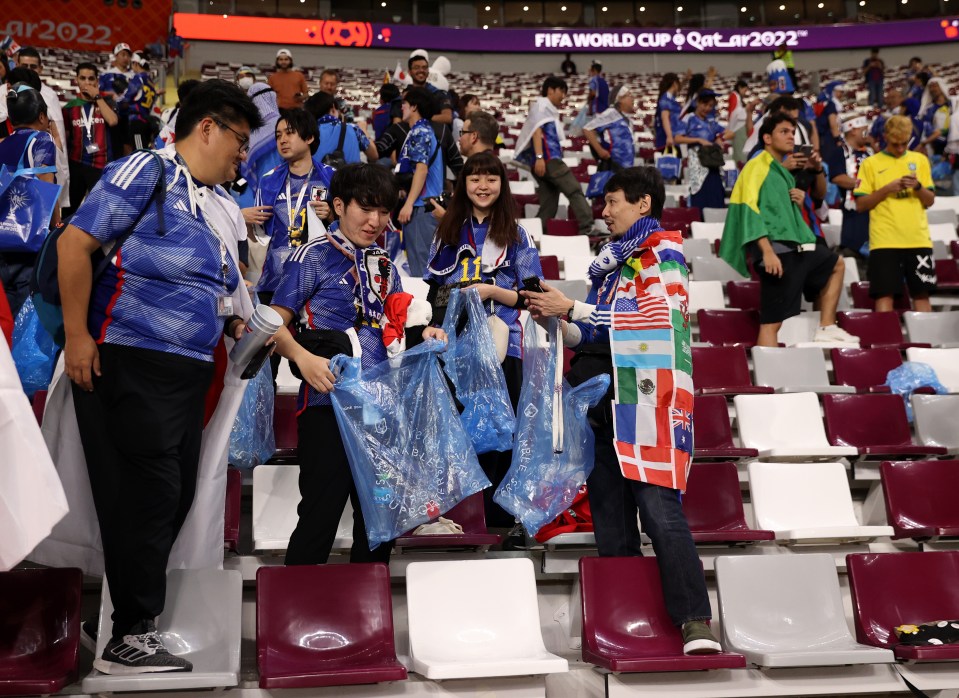 Most Moroccan fans may have been emulating Japan but one Atlas Lion supporter took his cue from the Lions of Teranga.

Senegal lost their talisman Sadio Mane on the eve of the tournament and their fans truly stepped up to give the rest of the team a boost.

The Senegalese supporters’ constant signing and dancing provided the soundtrack to the heroic 2-1 win over Ecuador.

And it proved so captivating that one Morocco fan couldn’t resist joining in. 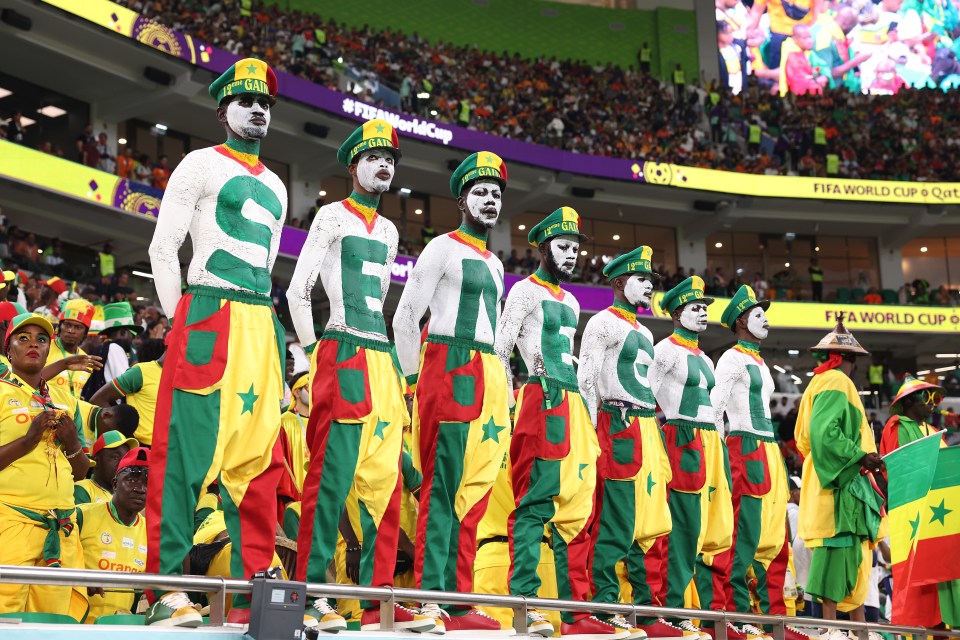 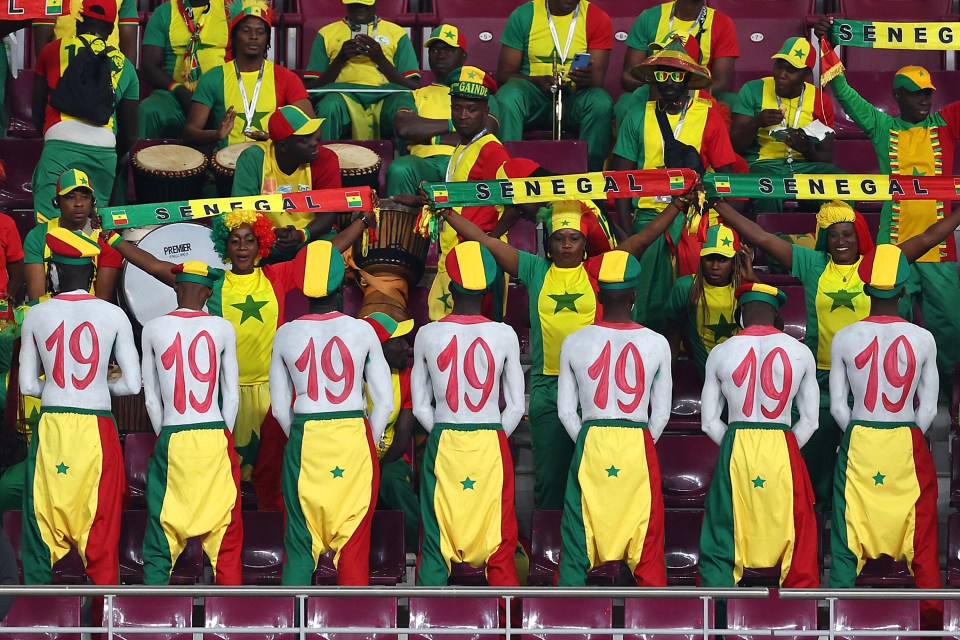 Breast of the rest

But the World Cup is not all signing and dancing as one Dutch supporter known as ‘T*ts Man’ found out!

Goudsblom, or Harry T*tsman as he’s commonly known, revealed that he avoided any issues during Netherlands’ 2-0 win over Senegal at the Al Thumama Stadium, but ran into problems outside. 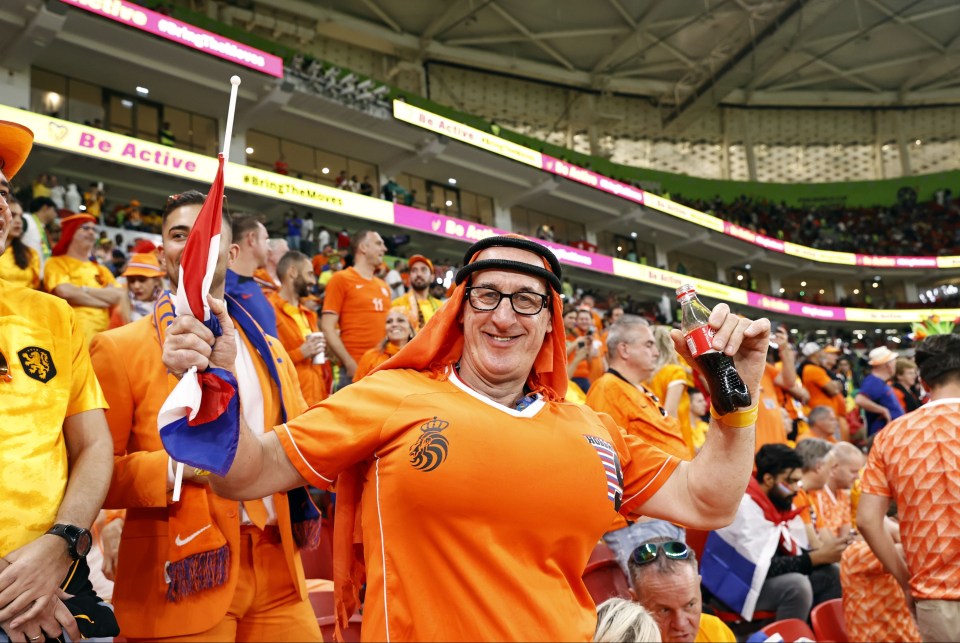 Speaking of problems outside didn’t ‘T*ts Man’ know he could have solved any dispute with a dance battle?

Perhaps Saudi Arabia supporters could have followed that cue as well.

Instead, one of their fans pulled a door off its hinges during wild celebrations sparked by a 2-1 victory over Argentina.

Some fans could also be heard shouting “Siuuuuu” – in reference to Lionel Messi’s rival Cristiano Ronaldo and his signature goal celebration – as they left the stadium in Qatar.

Not that Messi himself seemed too bothered by the Saudi joy as he focused on the fans that really mattered – his family.

The Argentina captain responded from that opening defeat in Qatar to steer his side out of the group and has been incredible ever since.

Messi’s goal helped seal a 2-1 win over Australia as the Argies kept their hopes alive under extreme pressure – and his family were in the stands to watch it all.

In one of the tournament’s most heartwarming moments, Messi was shown a video of his wife Antonela Roccuzzo and their three children Thiago, Mateo and Ciro, reacting to his 789th goal.

He said: “It’s really emotional. Obviously a lot of happiness, I know how they are living all this. How they are suffering and enjoying, just like how all of Argentina is living it.

“It’s the first time my sons are conscious of what being in the World Cup means, living this experience and understanding it. They suffer and enjoy a lot just like the rest of us.”

Since then, Messi has been on a mission to bring the World Cup back to Argentina and fans have been inspirational in their support.

They’ve been the noisiest and most colourful supporters at this World Cup and have shown their love for Messi at every game.

Will they roar the team on to victory against France in Sunday’s final? 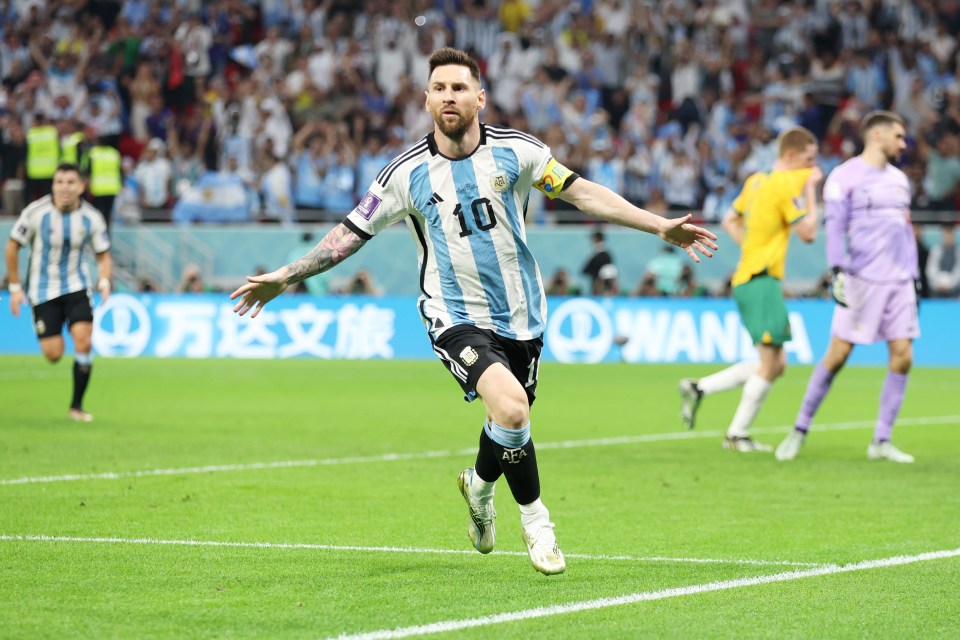 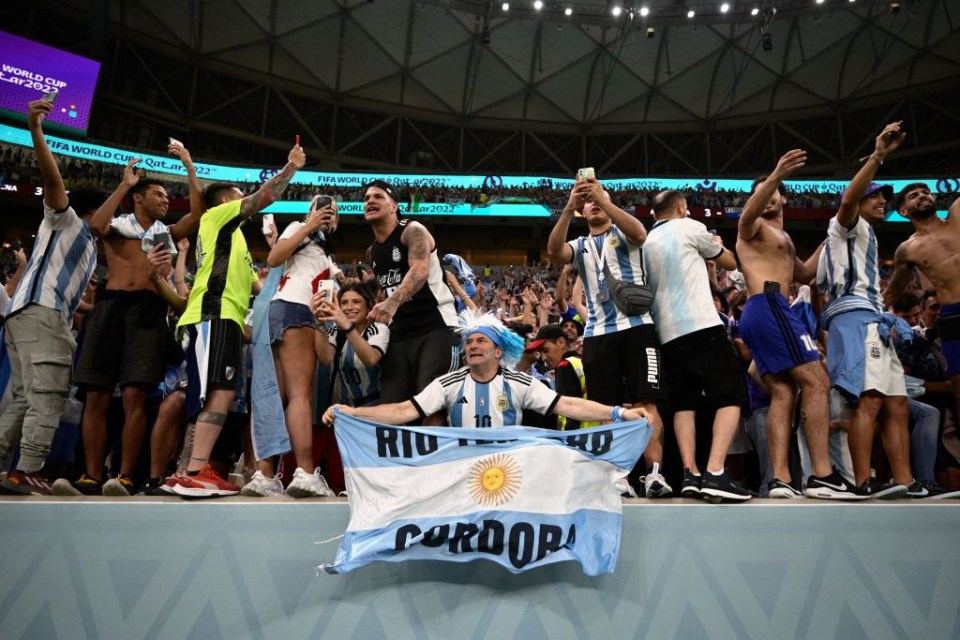 Saving the best for last

Summing up the 2022 World Cup; how a ‘hunt for beers’ led to an evening at a palace of a Sheikh’s son with monkeys, lions and exotic birds…

England and Everton fan Alex told talkSPORT: “We were just having a good time, having a mooch, getting our bearings right and the set-up’s spot on. We’ve been enjoying ourselves.”

Meanwhile, John, who was part of the party added: “Last night we met one of the Sheikh’s sons and he took us back to the palace and he showed us, he had lions and everything.

“They’ve made us so welcome and look around you, it doesn’t get any better than this.”

“We met one of the Sheikh’s sons & he took us back to the palace!”

“We were on the hunt for beers and we ended up at a big palace, we saw his monkeys & exotic birds!”

These England fans are out in Qatar & you HAVE to listen to their story! 🤣#FIFAWorldCup  #TSWorldCup pic.twitter.com/RlclrsnEsP

Throughout the tournament, talkSPORT has a special Carling correspondent reporting live from across the UK from a Carling pub. They are capturing the atmosphere at Carling fan locations and taking the temperature of the nation.