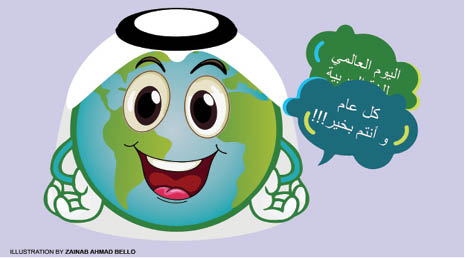 Tomorrow Sunday December 18, 2022 is World Arabic Language Day (WALD). This year’s celebration is the 10th since its first celebration in 2012. December 18 every year is set aside by the United Nations Education, Scientific and Cultural Organization (UNESCO) to commemorate the WALD. The occasion is used to highlight Arabic’s legacy and its immense contributions as the world’s richest language to humanity.

Established by the UNESCO in 2010, the WALD is intended to celebrate Arabic as a language and promote cultural diversity. The date for the WALD, December 18, was the day in 1973 when Arabic became the sixth official language of the UN. With a very rich history, Arabic is one of the most widely used languages globally; spoken by over 420 million native speakers and used by about 1.5 billion Muslims around the world including UNESCO’s 22-member states.

Some unique features of Arabic include being a language with no capital letters in its orthography. Unlike English and several other languages, verbs come before subject in the syntax of Arabic language. More than 7,000 words in the English language are either Arabic or derived from Arabic. Aside the classical form of the language, Arabic has many different dialects some of which are not understood by other speakers of the language.

The theme for this year’s WALD is, “The Contribution of the Arabic Language to Human Civilization and Culture”. The numerous contributions of Arabic to humanity as well as to knowledge production is better appreciated when Arabic language is examined within the context of its role in history. Although not many people, either out of ignorance or sheer phobia for the language and its speakers, associate Arabic language or Arab scholars with the early beginnings of science, the contribution of Arab philosophers made mainly through Arabic language to the development of science, medicine, mathematics and literature through ages is so huge to be ignored.

With capital at Baghdad, the Muslim world during the caliphate of Harun al-Rashid (reigned 786-809) witnessed the most brilliant period of scholarship. Baghdad in the ninth century became “a city with no peer throughout the world”. By translating Greek works into Arabic and commenting on them, Muslim scholars performed the enormous historical task of preserving the philosophic and scientific heritage of Greek philosophers and scientists; a body of knowledge they equally passed on to Christian Europe.

The most celebrated of all translators of Greek scientific works in to Arabic was Hunayn bn Ishaq al-‘Abadi (d. 877). Many of the early Arab philosophers were influenced by Aristotelian theories through their study of Greek scientific materials. They include Abu Yusuf Ya’qub bn Ishaq al-Kindi (d. after 873) commonly known as “the philosopher of the Arabs; Abu Nasr Muhammad al-Farabi (d. 950); Ibn Sina (or Avicenna, d. 1037) and Ibn Rushd (or Averroes, d. 1198).

The era of translation (750-850AD) laid the literary foundation that did not only help the Arabs to assimilate the classical heritage of Greece but equally influenced their ways of thinking. Apart from being translators of Greek works, Arab scholars carried on with original thinking and research; adding new dimensions to the already established theories and concepts. Their works were transmitted together with their contributions to Europe through Syria, Spain and Sicily; laying the basis of knowledge that thereafter dominated medieval European thought.

Arab scholars of the ninth through to the twelfth century that left intellectual foot prints in their respective areas of knowledge include Hunayn bn Ishaq whose work “Ashr Maqalat fi Ayn” is described as the earliest text-book on ophthalmology. Abubakar Muhammad bn Zakariya al-Razi (or Rhazes)’s treatise “Al-Judari wal Hasbah” is among several others considered as the first clinical account of small pox. Another scholar of the time generally described as father of Arabic alchemy is Jabir bn Hayyan. While Al-Biruni (973-1050) made his mark in astronomy; Al-Khawarizmi’s works were responsible for the introduction into the West of the Arabic numerals called algorithms after him.

The first person to realize that light enters the eye, rather than leaving it, was the tenth century Muslim mathematician, astronomer and physicist Ibn al-Haytham. He invented the first pin-hole camera after noticing the way light came through a hole in window shutters. “The smaller the hole, the better the picture”, he worked out. He thus set up the first camera obscura (from the Arabic word ‘qamara’ for a dark or private room). In the thirteenth century, a Muslim health personnel named Ibn Nafis described the circulation of the blood, almost 300 years before William Harvey discovered it. The space in newspaper column, such as this, is grossly inadequate to say everything about of how Arabic served as the language through which the Arabs contributed to human civilization.

Tomorrow at its liaison office in Maiduguri, the Nigeria Arabic Language Village (NALV) under the headship of Professor Ibrahim Muhammad as its CEO, will host Arabic scholars from all over Nigeria at an intellectual banquet during the grand finale of the events organised to celebrate the 2022 World Arabic Day. Governor Babagana Umara Zulum of Borno State has been invited to grace the occasion. The 3-day events, which started yesterday Friday December 16, 2022 will close tomorrow Sunday with activities of the WALD including the 39th national conference of NATAIS, lectures, and symposia; all designed to highlight the contributions of Arabic language and of its speakers to human civilization. To honour Arabic, at least during tomorrow’s WALD, families are encouraged to make Arabic language their lingua-franca in their homes even if it were for 30 minutes only.

The NALV (or Arabic Village in its short form) was established by the federal government to run academic programmes that include Arabic acculturation and immersion programmes for undergraduate students of Arabic language in Nigerian universities. The NALV also runs short-term proficiency and intensive courses in Arabic as well as translation services from and into Arabic. The Arabic Village was compelled at the height of insurgency after attacks on its physical facilities to relocate from its permanent site at Ngala to Maiduguri, Borno State capital.

To President Buhari who clocks 80 years today, we say, “Kullu Sannah Wa Anta Tayyib”. And to speakers of Arabic, we say, “Kullu Aamin Wa Antum Bi Alfi Khairin”. May Allah guide the custodians of Arabic, whether as natives or second language speakers, respectively in the Arab and non-Arab worlds, to restore past literary and scientific glories of the language, amin.