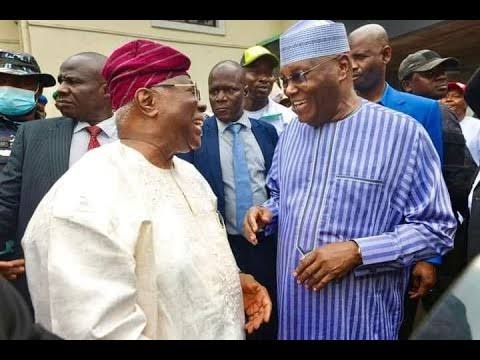 A chieftain of the Peoples Democratic Party, PDP, Bode George, has stated that he will not vote for his party’s Presidential candidate, Atiku Abubakar, in next year’s presidential election, unless the issue of inclusivity in the party is addressed.

George disclosed this on Tuesday morning while featuring on the Arise Television Morning Show programme.

Recall that he had supported the call for Iyorchia Ayu to step down from his position as the party’s National Chairman, saying the lingering crisis bedevilling the party might cause its defeat in the 2023 presidential election.

“Until this party returns to the founding fathers’ principles of unity, with equity, fairness and justice being the pedestal for any political decision taken in this party, and ensuring broad-mindedness to accommodate the concerns of all zones in this country, PDP becomes vulnerable to disaster in the 2023 elections,” he had said.

While re-stating his earlier stance, the PDP chieftain said he would not vote for Atiku in the forthcoming election unless the issue of inclusivity in the party is addressed.

“I will not vote for the presidential candidate of our party. Until the issue of inclusivity is addressed. Let them sit down, and think over it. It is not negotiable; every Nigerian is important for this election.”